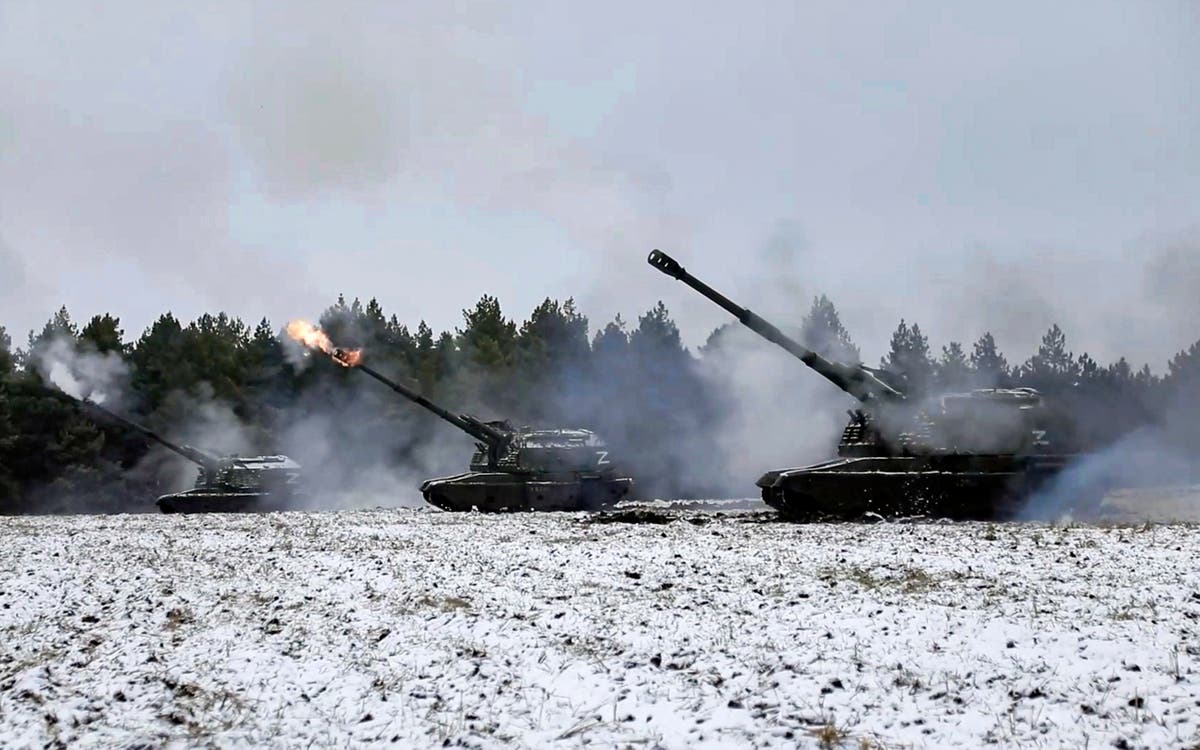 Ukraine has yet again rejected Russia’s claim to control Soledar and said that the region is still witnessing a battle for territorial control.

According to the Washington-based Institute for the Study of War, it was highly unlikely that Ukrainian forces still held positions within Soledar itself.

This comes as authorities clearing the debris from the Dnipro missile strike on Saturday said that the chances of pulling more survivors from the wreckage of the apartment building are now “minimal”.

Borys Filatov said: “May God help us find several of them. I think the number of dead will be in the dozens.” The death toll from the air strike rose to 30 on Sunday.

The cargo ship MKK 1, travelling from Ukraine to Turkey, was grounded in Istanbul’s Bosphorus Strait on Monday and traffic in the strait was suspended but no damage was reported, shipping agents Tribeca said.

Several tugs were among vessels sent to provide assistance to the ship, the coastguard authority said.

Television footage showed the bow of the ship, carrying 13,000 tonnes of peas, grounded close to the coastline on the Asian side of the Bosphorus.

ICYMI: ‘This is what madness looks like’: Inside Putin’s endgame for Ukraine

As Russia claims to have seized the eastern town of Soledar after months of fighting, Bel Trew reports on what it means for Moscow’s invasion – and for the Ukrainians in the path of any further advance.

Soldiers from the Ukrainian armed forces are “almost certainly” maintaining positions in Soledar, north of Bakhmut even as they continue to face a series of Wagner group assaults, the British defence ministry said today.

Ukraine’s eastern sector on the Donbas front saw intense fighting over the weekend in both the Kremina and Bakhmut, the ministry pointed out.

“Around Kremina, fighting has been characterised by a complex series of local attacks and counter-attacks in wooded country. However, overall, the UAF continue to gradually advance their front line east on the edge of Kremina town,” the MoD said in its latest intelligence update on the war.

It added that over the last six weeks, both Russia and Ukraine have achieved hard-fought but limited gains in different sectors.

“In these circumstances, a key operational challenge for both sides is to generate formations of uncommitted, capable troops which can exploit the tactical successes to create operational breakthroughs,” the ministry added.

Officials in Belarus have accused Ukraine of “provoking” the Russian ally on the heels of the joint military drills between Moscow and Minsk starting today.

The situation on Belarus’s southern border which it shares with Ukraine was “not very calm,” and Ukraine has been “provoking” Belarus, according to Pavel Muraveyko, first deputy state secretary of Belarusian Security Council.

Mr Muraveyko said: “We’re maintaining restraint and patience, keeping our gunpowder dry. We have the necessary set of forces and means that will respond to any manifestations of aggression or a terrorist threat on our territory,” according to a post on the Belarusian defence ministry’s Telegram app yesterday.

The death toll from the Russian missile attack on a residential building in Dnipro on Saturday has now reached 35, authorities said, as rescue operations entered the third day.

The airstrike hit a section of the apartment building and tore it down, killing dozens — including two children, Dnipropetrovsk oblast governor Valentyn Reznichenko said on Telegram.

Russia has denied targeting residential and civilian infrastructure in its “special military operation” in Ukraine, but there have already been thousands of civilian casualties in the 11-month war.

Editorial: Despite the success in Donetsk, this is a weak moment for Russia, and the West should ensure that Ukraine can take full advantage of it.

Ukraine has continued to insist that its forces are still fighting in Soledar after Russia claimed last week to have taken control of the town.

Russia’s forces, mostly led by mercenary group Wagner in the eastern Ukrainian territory, are advancing their military offensive in and around the key mining town from various directions.

According to the Washington-based Institute for the Study of War, it was highly unlikely that Ukrainian forces still held positions within Soledar itself.

Expanded US training for Ukraine forces begins in Germany

US military chief General Mark Milley has said that Washington’s expanded combat training of Ukrainian forces began in Germany yesterday, with a goal of getting a battalion of about 500 troops back on the battlefield to fight the Russians in the next five to eight weeks.

Milley, who plans to visit the Grafenwoehr training area today to get a first-hand look at the programme, said the troops being trained left Ukraine a few days ago. In Germany each will be provided with a full set of weapons and equipment.

Until now the Pentagon had declined to say exactly when the training would start.

Russia and Belarus will hold joint air force drills starting today, amid fears in Kyiv and the West that Moscow could use its only regional ally to launch a new ground offensive in Ukraine.

Officials in Belarus have said that the air force drills are defensive in nature to prepare for possible combat missions, but the move comes as concerns grow that Moscow is pushing Minsk to join the war in Ukraine. Vladimir Putin had met his Belarusian counterpart in Minsk last month and troops of both the countries have been training alongside the war.

The Kremlin has denied accusations of wanting to rope Belarus into playing a more active role in the war.

Minsk has separately denied having any intention to enter the conflict, but Kyiv has repeatedly warned of possible attacks from Belarus.