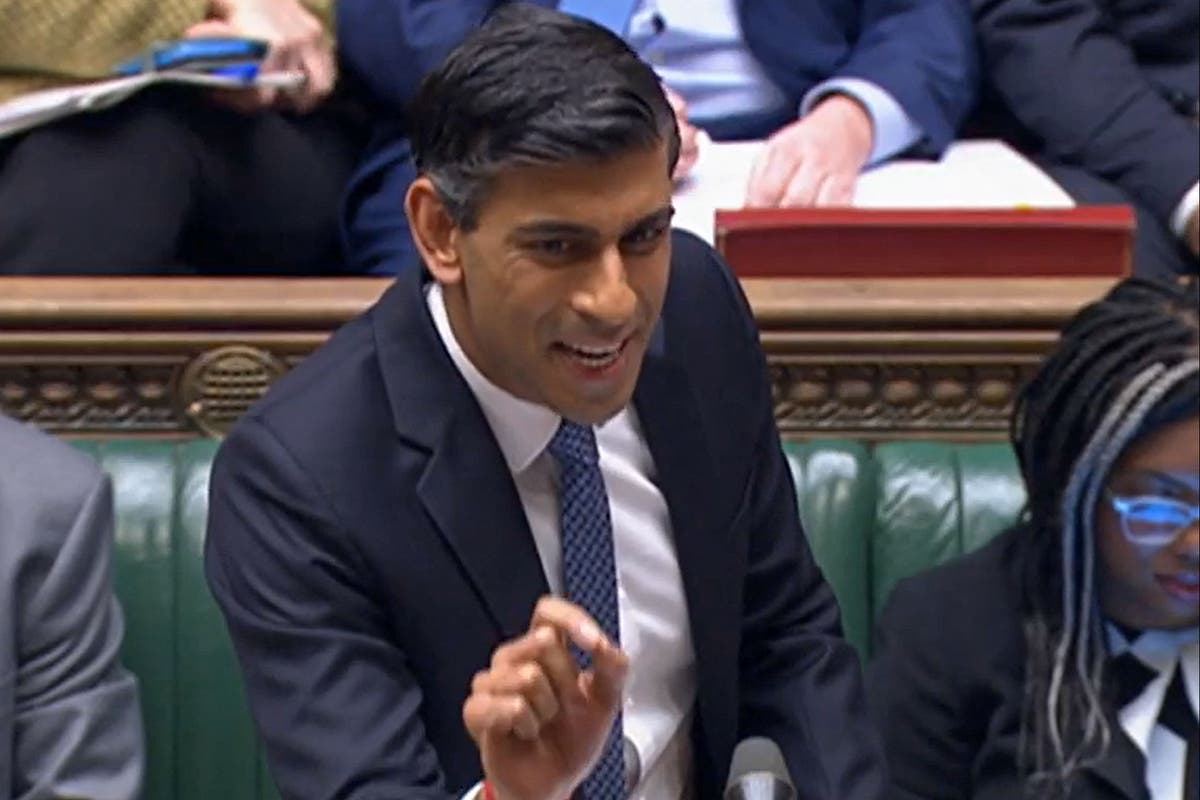 ishi Sunak is facing questions from MPs on Wednesday on his plan to engage with unions as strike action escalates across public services inlcuding health, education and rail.

On Wednesday, Royal Mail workers, university lecturers and college staff were all taking part in industrial action as thousands of ambulance workers voted to strike before Christmas.

The Prime Minister is also under pressure to stave off a rebellion within his own party, including from Liz Truss and Boris Johnson, as MPs back law changes that would permit more onshore wind farms.

Backing onshore wind projects would directly contradict a pledge by Mr Sunak during his leadership campaign. Labour has said they would ditch the current Tory ban on new onshore wind farms.

Prime Minister Rishi Sunak said there has been an “unacceptable deterioration” in Avanti’s service.

MP Esther McVey mentioned the train service between her constituency and London, saying it “was always hourly, direct and took one hour 50”.

She told the Commons: “Now you’d be very lucking if you got a direct train and the journey time is… often double, and that’s not restricted to strike days, that’s day in day out on Avanti trains.”

She asked “what the Government’s going to do to sort this out”.

Mr Sunak said she was “absolutely right about the unacceptable deterioration in the quality of Avanti’s service”.

“The Transport Secretary is rightly monitoring and holding them to account. There is a plan to increase the number of trains… to more than 100 additional drivers, and restoring the full direct service between Manchester and London.”

Sir Keir told the Commons: “It is simple, he can carry on being pushed around by the lobbyists, giving away £1.7 billion to private schools every year or we can put that money to good use. End the Tory scandal.

“Hundreds of thousands of children leaving school without the qualifications that they need. I have made my choice, what is his?”

Rishi Sunak replied the Government was “improving school standards for every pupil in this country”.

He added: “This is about supporting aspiration, and that is what this Government is proud to do.”

Rishi Sunak said strikes by Royal Mail workers is “not the right approach” and is “simply unaffordable” for hard-working taxpayers.

The Prime Minister said it’s “simple not possible” for Royal Mail staff to receive the pay demands they are asking.

She said 9 in 10 local authorities are not able to identify these children.

When will a register of home school children be established to make sure “they’re not falling through the net”, Ms West asked.

MP Abena Oppong-Asare asked what the Prime Minister was doing to reduce knife crime after two 16-year-old boys were killed in Thamesmead over the weekend.

Rishi Sunak said the government is boosting the number of police offices, giving them extra powers to get knives off the streets, introducing new court orders and lifting restrictions for stop and search.

MP Angela Richardson said the Government cannot take a single step back in efforts to tackle violence against women and girls.

PM ‘rams through’ bill that would ‘rip up’ workers rights

SNP MP Ian Blackford this Prime Minister asked Rishi Sunak about admitting that Brexit is cause of economic difficulty in the UK.

He accused the Prime Minister of “ramming through” a bill that would rip up European law that would protect workers rights post Brexit.

Rishi Sunak said he was proud to vote for Brexit to reduce migration and “get control of our borders”.

He asks: “How tough is he going to get with his backbenchers blocking new homes this country so badly needs?”

”Trickle down education is nonsense,” the Labour leader said.

“His education minister asks how much better it would be if the Tories get rid of handouts.”

Mr Starmer said the Government gives away £1.7bn to schools every year.

“We could put that money to good use,” he said.

He asked the Prime Miniser: “Why did he hand them nearly £6m in taxpayers money in state support?”

“We’re helping millions of disadvantaged kids with their lost learning. During Covid he wanted to keep schools closed.”

Denial of responsibility! Yours Bulletin is an automatic aggregator of the all world’s media. In each content, the hyperlink to the primary source is specified. All trademarks belong to their rightful owners, all materials to their authors. If you are the owner of the content and do not want us to publish your materials, please contact us by email – [email protected]. The content will be deleted within 24 hours.
Prime MinisterRishi Sunak
0
Share